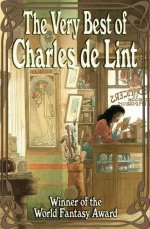 When asked to choose his “very best” stories, Charles de Lint went directly to his fans, who helped him select this collection of timeless, magical tales. From his beloved Newford to the streets of modern Ottawa, these stories take you effortlessly to a place where mystery and myth are right next door. To quote his readers: “His stories are good for the heart and soul…he reminds you of hope and strength and Beauty and Grace that you may have forgotten.”
“Just as Charles de Lint’s pen drips magic and enchantment, he is also never afraid to write about the darker and painful side of life, and he writes it in a way that moves you. Give this wonderful book a chance; I promise you it won’t disappoint you. Even more, I can assure you, you won’t be the same person when you are done with it: de Lint will have changed you with his magic.”