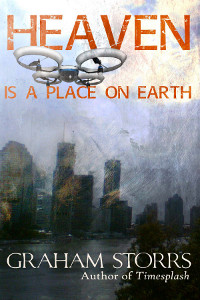 Ginny had only dated the enigmatic Cal Coplin a couple of times when the police arrived to question her about him. He’d disappeared – something that should be completely impossible in the late 21st century when everyone was electronically tagged. And then Ginny received a recorded message from Cal, asking her to deliver a small package for him. Her decision to help him plunges Ginny into a world of fear, corruption, and massive deception. On the run from the police, a dangerous terrorist organisation, and a shadowy corporation, Ginny struggles to stay alive and free while she tries to understand what is happening and prevent a deadly attack on the government. But in a world dominated by augmented and virtual realities, nothing is as it seems, and the deception runs deeper than anyone could imagine.

Una respuesta a «Libro gratis : Heaven is a place on Earth»