Some days ago we published the review of “Three parts dead” by Max Gladstone and today we bring you an interview with him. The interview is very interesting, hope you enjoy it!. You can read this entry in Spanish.

As for author influences, Roger Zelazny is a huge one.  I’ve read his book “Lord of Light” about twenty times, and basically everything else he’s written, though I’m still working my way through his short fiction.  Other immensely important writers for me growing up include Robin McKinley, Ursula K Leguin, Dorothy Dunnett, and, honestly, William Shakespeare.

As for current writers—some of the writers on the list above still live, so they count.  Also, while I didn’t find John Crowley‘s writing until college, when I did, it impressed me immensely.  “Little, Big” is both The Great American Novel and The Great American Fantasy Novel.  I don’t know anyone else who can make that claim.

Xiuning Middle School is a tiny magnet middle school in the middle of southern Anhui, which is tea country.  The village across the street from the middle school had a few hundred people, and the nearest larger town was about ten minutes’ fast bike ride away.  Outside of that, around us we had tea and canola fields, and water buffalo.  Misty mountains in the distance.  Chickens everywhere.  Enterprising rats in the fields, Odin the One-eyed Cat guarding the trash heap behind the school, egret swarms in spring (chased off the school grounds by hirelings with illegal guns), Ming-dynasty watchtowers leaning over to fall, and of course classes full of some of the brightest young students who have ever been forced through a disgustingly intense standardized testing regime.  Teachers struggling to teach under the same sick testing mandates.  Communist Party officials hanging around challenging us to drinking contests.  And wherever I went, being instantly recognized, since our arrival was televised—even if the Stars Align and I suddenly catapult to JK Rowling levels of success I never will be so singled out as I was on any given Xiuning streetcorner.  Wherever I went in school, students following me with cries of “Hello, MAX!”  Teaching students the Twist at New Year’s Eve parties.  Hearing about kids’ hopes for their lives; introducing some to rock & roll.  Coming home one day to find our house draped in banners and covered in graffiti saying ‘TIBET IS AN INDISPUTABLE PART OF CHINA.’  I could write books and books about those two years.  Maybe one day I will.

I’ve only read “Bridge of Birds” a few months back, and I loved it so much I’m saving the rest for some day when I really, really need a good new book.  Amazing.  I have no idea how “Bridge of Birds” is as good as it is.  It has no right to be.  It’s a surprise and a gift.  The only weakness I can think of is that it’s a little short on female characters, but for a book that revolves around boys, men, power, and growth, and the ways these things can inflict terrible damage on the world in general and women specifically, maybe that’s not a surprise.  Anyway.  He’s great.

No, seriously, they all go together so well.  Law and economy is easy—there’s a whole school of legal thought called “law and economics” for that reason.  And then, well, magic.  On the one hand we have transactions of invisible power that affect the spiritual environment and rely on the faith of all those concerned, and on the other hand we have… economics.  Meanwhile, law and magic both use dead languages (and ancient civilizations!), contracts, bargains, loopholes, confrontations, human sacrifice, and mountains upon mountains of books.  They married quite well together. 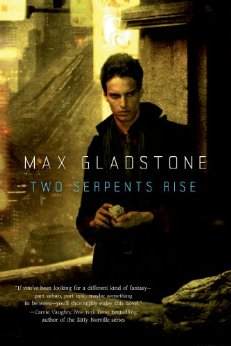 The next book, “Two Serpents Rise”, is set in the same world as “Three Parts Dead”.  Decades after a desert city kicked out its gods, they’re struggling on the edge of survival.  Someone’s poisoned their water supply, and Caleb, risk manager and descendant of the banished high priests, needs to figure out why, and stop them.  Chinatown meets Legend of Korra in Aztec-influenced psudoLA.  Kinda sorta.

I wish to thank again Max for his answers and recommend you his book “Three parts dead”.

2 respuestas a «Interview with Max Gladstone»