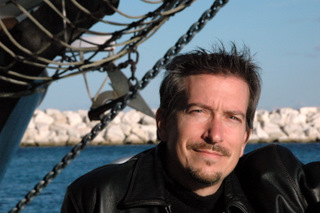 Author Bradley P. Beaulieu (you can read our review here and a short story from him here) has answered some questions for Fantástica Ficción. We encourage you to read his trilogy Lays of Anuskaya and his new projects. (You can read this entry also in Spanish)

When did you know you wanted to become a writer? Which other authors have influenced you? How do you document yourself? Why did you choose that Russian environment for your trilogy?

I came to writing pretty late. I dabbled in high school and college, but didn’t really take things serious until my early thirties, when I started attending various conventions and workshops and conferences. But I’ve always loved fantasy. I didn’t really read much outside of specfic, but I always gravitated toward big, secondary world fantasies like The Lord of the Rings and Dragonlance and Thomas Covenant the Unbeliever and the Coldfire trilogy.
Initially, I stumbled on the Russian flavor of the novel. I was working heavily on worldbuilding at the time. I knew that I wanted the island archipelagos to be cold and inhospitable, and I also knew that I didn’t want the typical Western European setting, because, while I’ve read a lot of those stories and enjoy them, it wasn’t something I really wanted to explore in this tale. I wanted something new, but I also didn’t want it to be completely foreign for the epic fantasy reader. Muscovite Russia seemed like something interesting and exotic to use that matched the «cold and inhospitable» flavor of the islands. And once I’d tried it on for size, I really liked it and it became an inseparable part of the story.

How do you cope with your daytime job and your writing?

It isn’t easy, that’s for sure. I typically give myself about an hour for writing. In that time I can generally get out 1,000 words, or about 4 manuscript pages. That’s enough to easily knock out a novel in a year, which is what I’m shooting to do at this point in my career. If I could break away and do this full-time, I think I could easily do two books a year. But until then, I’ll keep plugging away after the kids are in bed, churning out the words.
The other thing that’s taken up more and more of my time since «The Winds of Khalakovo» came out is marketing and publicity. It takes up quite a bit of time, and sometimes eats into my writing time for the day, but I try to be very diligent about maintaining the writing time, because if I don’t get that out, I won’t be delivering books on time, and that would be much more disastrous than delaying blog posts or not starting the book giveaway I wanted to run.
And I’ve also started the Speculate podcast with Gregory Wilson, which also takes time. It’s all definitely a delicate balance, because I refuse to disconnect from my family. I have two young kids, 3 and 7, and I won’t miss their childhood. And I rather like spending a bit of time with my wife. So juggling all these things is tough. But somehow the days march on and hopefully I’m managing to keep most of the balls in the air.

What did it mean to you winning the Writers of the Future Award?

That was a big break for me. The Writers of the Future Award is well regarded in the specfic community, and winning it is certainly a badge of honor. Perhaps more than the award itself, I really enjoyed my time at the workshop they run for the winners. I was flown out to Hollywood, California to spend a week with Tim Powers, K.D. Wentworth, and my fellow winners and published finalists. That was a wonderful time, and it led to some friendships I still maintain today. I also met Jay Lake and Sean Williams there, and Jerry Pournelle, Anne McCaffrey and Todd McCaffrey and some of the illustrators as well. It was a wonderful time that I will never forget.

How it has been your experiencie with self-publishing? Is the future for the authors to turn hybrid? Do you think that working on things such as your writing´s layout refrains you from writing?

It has been quite a rush to go through the self-publishing route for my story collection and then the third book in my trilogy. It’s very rewarding because the writer has complete control. As long as you’re careful to create a quality product, the rewards can be even greater than in traditional publishing because you’re wearing all of the hats instead of only the writer (and sometimes marketer).
The flipside of this, of course, is that it takes a lot of time. As you say, it does indeed take me away from my writing, and that has been an unfortunate (but not unexpected) side effect. It’s something that all writers need to take into account, because you have to balance the time you’re spending on getting a new book or collection out vs. writing a new book. That’s a big opportunity cost, and each writer should weight it carefully.
But in general, I do thing that more writers will be going the hybrid route. There are just certain types of projects that don’t lend themselves to self-publishing. Short story collections are a good example. They aren’t big sellers for publishers, so many writers will bring those out themselves. Science fantasy and other crossover novels are more good examples, because these are the types of stories that aren’t immediately obvious to publishers how to market, and so you may either get no offers or lowball offers that will make writers head for self-publishing.

How do you work with illustrators?

I had a wonderful time working with Evgeni Maloshenkov on the interior illustrations for my books. I essentially played art director. I would come up with an art brief, which would include an excerpt from the novel, a description of the scene I want illustrated, and some reference photos I dug up from the internet. Then Evgeni would come up with an initial sketch, which I would comment on. Once we were done going back and forth, Evgeni would created the final illustration and I would make any final tweaks from there.
It was really fun picking my own scenes and having Evgeni illustrate them. It was a nice collaborative effort that turned out some wonderful pieces.
Here are a few examples of the art we came up with for the short story collection and for my third novel:
http://quillings.com/2013/05/22/fourth-art-reveal-for-the-lays-of-anuskaya-jump/
http://quillings.com/2013/03/02/story-collection-update-plus-new-interior-art-reveals/ 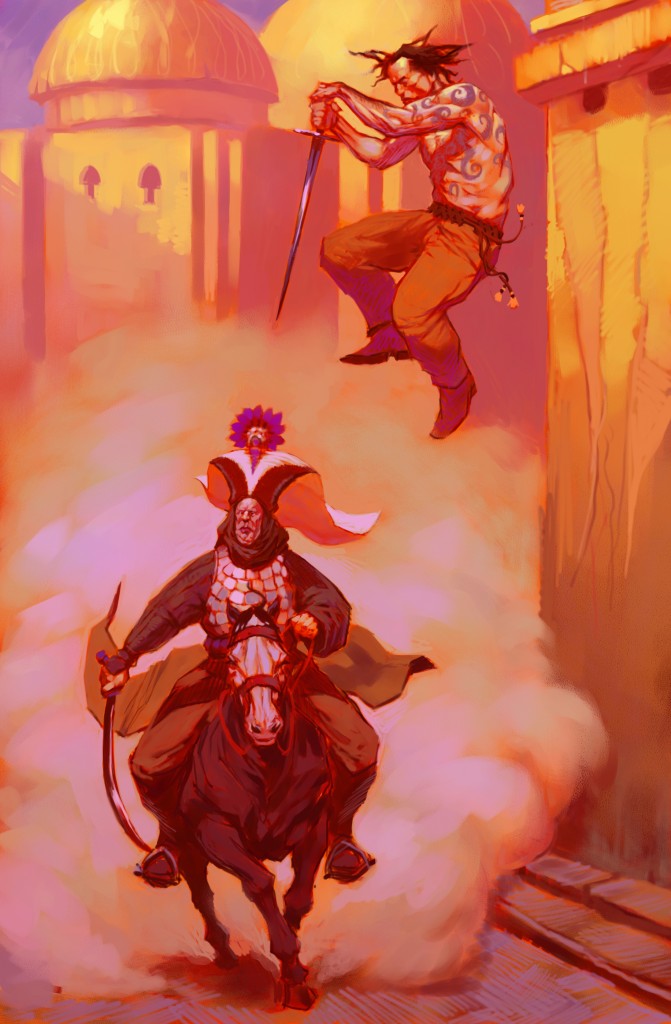 I haven’t yet been contacted by any Spanish publishers, but I would love for them to reach a new audience in Spain and elsewhere in the world. Hopefully soon!

The Song of the Shattered Sands is a new trilogy that I’ve sold to DAW Books in the US and Gollancz in the UK. It’s a story about a kick-ass female pit fighter who rises up to challenge the rule of the Twelve Kings of Sharakhai. It’s set in a re-imagined Arabian Nights setting filled with sandships, fickle gods, and scheming allies. I’m 2/3 of the way through the first book now, and I’m really excited by the story. It’s a bit of a departure for me, as I’m focusing on a single point-of-view character. It’s still epic fantasy, only told through the voice of a woman who hopes to avenge her mother and her people.

Absolutely. I don’t know where I’d be today without social networks. I’ve met so many wonderful people, including you, through social networks. Reviewers, readers, fans, podcasters, bloggers, and so on. I didn’t start with much of a fan base, so it’s been important for me to try to leverage social networking to get the word out. I’m glad its around. I can’t imaging trying to do all this face-to-face like writers had to do in years past.

What response has had your article in Whatever about the relationship between your trilogy and the current political situation?

You know, I’m surprised by that. I didn’t get much reaction from it as yet. I do think that it’s an interesting phenomenon, how fiction reflects the social mores and events of our time. We’re all creatures of the world and era in which we live. You can see trends and waves of fiction that follow major events in world history like the World Wars or the Great Depression or the Industrial Revolution or the Cold War. It’s interesting as well how literature can have conversations with itself when works are written in response to others, when the pendulum of common opinion swings back and forth on various topics. In many ways, literature is both a mirror to our time and a shaper of opinion, which is one of the most interesting things about it.

Where did you get the idea for Speculate!? How do you choose the books you talk about?

Gregory Wilson and I got to talking at World Fantasy in Columbus, OH in 2010. It wasn’t about a podcast at all. It was about a piece of fiction—Kij Johnson’s «Spar,» to be exact. We went back and forth on our thoughts about it, and it was such a fun conversation that when Greg started batting around the idea for a podcast, he thought that our verbal sparring would translate well to a podcast.
It’s turned out to be a lot of fun, and it’s allowed me to meet a ton of wonderful authors I might not have been able to meet (or at least, to talk to in depth), and I hope it’s been fun for our fans as well. We have tended to choose the novels or stories that we want to read, or people we find interesting in the field. We do also take suggestions from fans of the show. Lauren Beukes is an example of that—a fan recommendation—who’s coming up on the show very soon.

Do you think your cooking gets reflected in your writing?

Well, I do try to create interesting dishes in my worlds. And it’s been fun to research the cooking techniques of various cultures, their traditional recipes, their drinks, both alcoholic and non, their desserts, the customs that are built around the meal, and so on. Food is such a wonderful touchstone to any civilized society. It reveals so much about them and about their world. The spices they have and their relative price can show where that particular society sits in respect to the trade routes. Food is closely related to religious rites, and so can reveal things about their religious beliefs. The basic staples often show what type of land the people live upon, whether its seashore or mountain plateau or barren desert. The implications of food are much more far reaching than people give it credit for sometimes.
So it’s been a fun and interesting journey to imagine the foods that belong in a story along with the story itself. It’s something I think I’ll always include in my stories, because I love cooking and its history so much.
I want to thank again Brad for giving us his precious time.