In the far future, eons after the demise of Humanity and its far-flung galactic empire, a group of alien archeologists visits Earth to uncover the secret of the dead race’s initial overwhelming success and its ultimate death.

Digging through layers of archeological strata at Olduvai Gorge, they discover seven unique artifacts, each related to a different era of humanity’s history and each telling a unique story about humankind’s strengths and weaknesses. But are they prepared for their final discovery, which will change their worlds forever?

Seven Views of Olduvai Gorge is one of the most celebrated novellas ever written. It not only won both the Hugo and Nebula, but also the HOMer award and the SF Chronicle Poll and was a nominee for the Locus Award and the Sturgeon Award. It was also nominated for a number of international awards, winning the Ignotus and the Universitat Polytechnica Awards in Spain, the Prix Ozone Award in France and the Futura Award in Croatia. 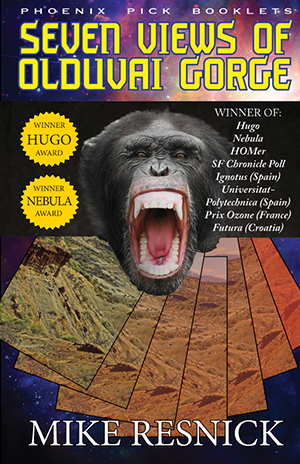