It promises to be the greatest voyage of exploration in human history.

From the stagnant, placid society of twenty-third-century Earth comes an idea so powerful that it seizes the imagination of all humankind. A starship will be sent deep into the unknown galaxy in search of habitable worlds, with the hope that the challenge of colonization will somehow rekindle the dying human spirit.

Fifty men and women are chosen to crew the Wotan, each nursing his or her own secret dreams and fears. Their leader is the stoic year-captain, drawn to the dangerous mission by his lifelong quest for meaning.

The single most important member of the crew is the blind Noelle, whose telepathic link with her blind twin sister on Earth provides the Wotan’s only contact with Earth as it speeds through the pearl-gray twilight of unfathomable nospace.

The worlds that the Wotan encounters are both strange and inhospitable, and with each disappointment its mission seems more and more hopeless. Then Noelle’s mind-link with Earth is inexplicably broken, and the crew begin to despair, fearing they’ve been condemned to wander alone through the vastness of space forever, cut off from any contact with humankind.

But when Noelle unexpectedly senses a massive alien presence in the vast vacuum of deepest space, the crew suddenly realize that their every assumption about life and the universe may prove dead wrong.

Starborne is a thoughtful, introspective look by one of the Grand Masters of science fiction at what it means to be human and to live a life of meaning. 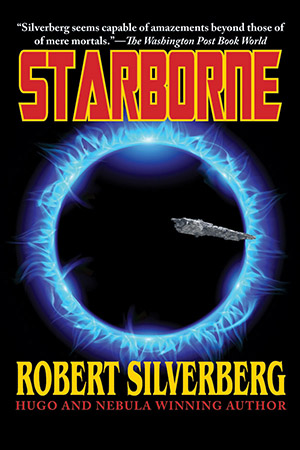