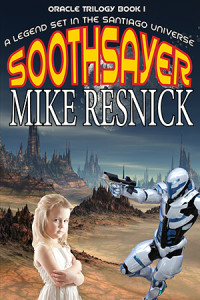 Readers of Santiago and Mike Resnick’s other exciting and evocative novels know that the galaxy’s Inner Frontier is filled with some mighty dangerous characters, such as the Iceman, the Mouse, Merlin, the Yankee Clipper, the Mock Turtle, and more.

Come meet her, and her one friend, and her multitude of enemies, in the pages of Soothsayer, the first book of the Oracle Trilogy – and experience an adventure similar in tone both to Santiago and to Josh Whedon’s TV series Firefly (and its follow-up movie Serenity).

Mike Resnick is the winner of 5 Hugos (from a record 37 nominations), as well as dozens of other major awards all across the world, and was the Worldcon Guest of Honor in 2012.